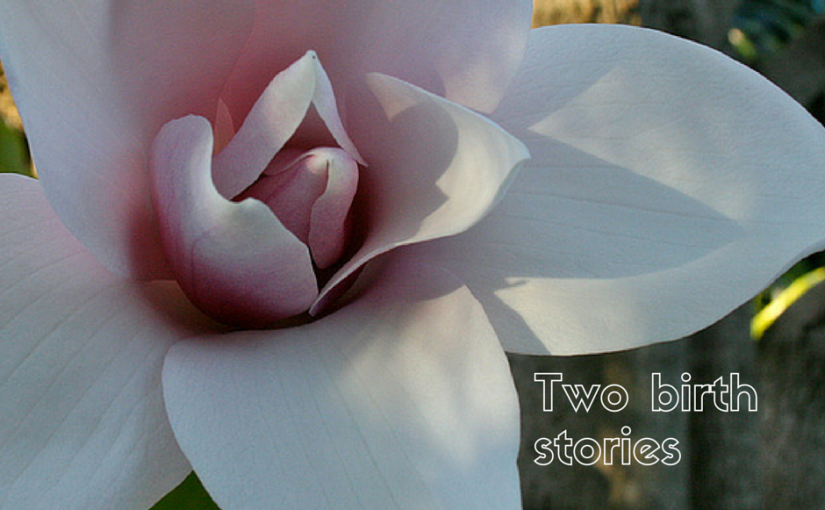 Birth is such an important time in a woman’s life. When a baby is born, a mother is born as well. Here are some thoughts about my two birth experiences with our boys. Reading other people’s birth stories has helped me process my own experiences, so I am offering these up in the hope they may help someone else.

Labouring at home
Get to hospital: freak out!
Vaccum and he’s here

Leo’s birth was traumatic for me (and probably for him too). We laboured beautifully at home (got to 9cm dilated), but when we got to hospital things went pear-shaped. He was born with the use of ventouse extraction, with a lot of fear and a bunch of medical people we had never met before in the room.  He was whisked away for oxygen before I could hold him, or even look at him. We were reunited about twenty minutes later, but it was the longest twenty minutes of my life.

For the first few hours after he was born I felt like it had all been wonderful. I had a beautiful, healthy baby after all.

But then the memories of the birth started coming back to me in bits and pieces, along with a flood of emotions. I remembered being told not to push when I had the urge to (with no explanation) and then later being told crossly that I wasn’t pushing hard enough or fast enough and that my baby was in danger. I remembered the rushed episiotomy. The phone call for back-up being made in haste and the room being filled with medical professionals and bright light and me flat on my back.

Nothing was explained to me about what had just happened. It felt like I could have just dreamt it all.

“A woman is more likely to develop PTSD if she feels like all control has been taken from her and she is the passive object of other’s ministrations. She isn’t asked for consent, for example, for different maneuvers which they may do. She’s supposed to shut up and let them get on with doing the birth. And she comes out of that feeling helpless, and this helplessness can persist in other areas of her life too, so it’s not just the birth. So she gives up and feels that it isn’t justified for her to take responsibility for anything. And women can feel this for many, many years and I’ve had women in their 60s and 70s call me to talk about births which they haven’t yet worked through and this experience has stayed with them and incapacitated them.”

I believe in Jane Hardwicke Collings‘ idea that “everyone has the birth they need to have to teach them what they need to learn on their journey to wholeness.” She also believes that we learn something from each birth that helps women mother their child. Through Leo’s birth I learnt that I didn’t know how to communicate my needs effectively. Everything that I learnt during Leo’s birth, and in those early months as his mother, taught me how to tell people what I needed and how to advocate for myself and him. Now that Leo is five, it makes my heart sing to see how easily he tells people what he needs. That was always something I struggled with as a child (and as an adult).

I couldn’t imagine having another child until I had processed all of my feelings and unanswered questions about Leo’s birth. When Leo was about three I got my notes from the hospital and paid an independent midwife to go through them with me. The process was incredibly healing and answered heaps of questions.

I felt ready to have another baby and learn whatever I needed to learn this time around with an open heart.

Around this time I asked Leo if he remembered being born and he said that he remembered having a sore neck. This is amazing because I don’t think we ever told him much about his birth, but his head was on a funny angle after he was born. Children are amazing.

I feel really chilled
Hubby: get the bath ready!
Whoa! That was so fast!

Clem was born at home. We had a wonderful independent midwife who I saw for the duration of my pregnancy, the birth, and the first six weeks after he was born. It was amazing to have the continuity of care.

We weren’t planning for Leo to be present at the birth, but it all unfolded so fast (the whole birth was about one and half hours) that my Mum, who was his support person, wasn’t there in time to hang out with him. Leo had predicted that the baby would be born on that Sunday in the afternoon (kids are amazing) and as it turned out he was the only other person in the room when Clem was born! (Jeff was getting more hot water for the birth pool and our midwife, doula and my Mum were all in transit.) Our midwife arrived just after Clem’s head had been born and helped us with his cord. Such perfect timing.

Leo did a dance of joy after Clem was born that I will never forget. It was like a tribal dance. Clem is really into rhythm and music and I feel like Leo was channeling Clem’s essence in that moment. Gives me goosebumps to think about it!

The whole birth was an incredibly peaceful and powerful experience. I felt fully in touch with what I was capable of, and the power of our love as a family.

I thought that if I had an untraumatic birth second time around that I may not have the same breastfeeding and mental health challenges that I had with Leo, but this wasn’t to be. We had the same breastfeeding challenges (Insufficient Glandular tissue and the need to supplement Clem with formula from three days old), and I had what was confirmed as mild postnatal psychosis again. I know for sure though that the way that our whole family responded to everything that unfolded was greatly aided by having a peaceful, private, loving, connected birth experience.

Big love and hope for healing to any Mamas out there with trauma surrounding their birth experiences.

4 thoughts on “The story of two births”